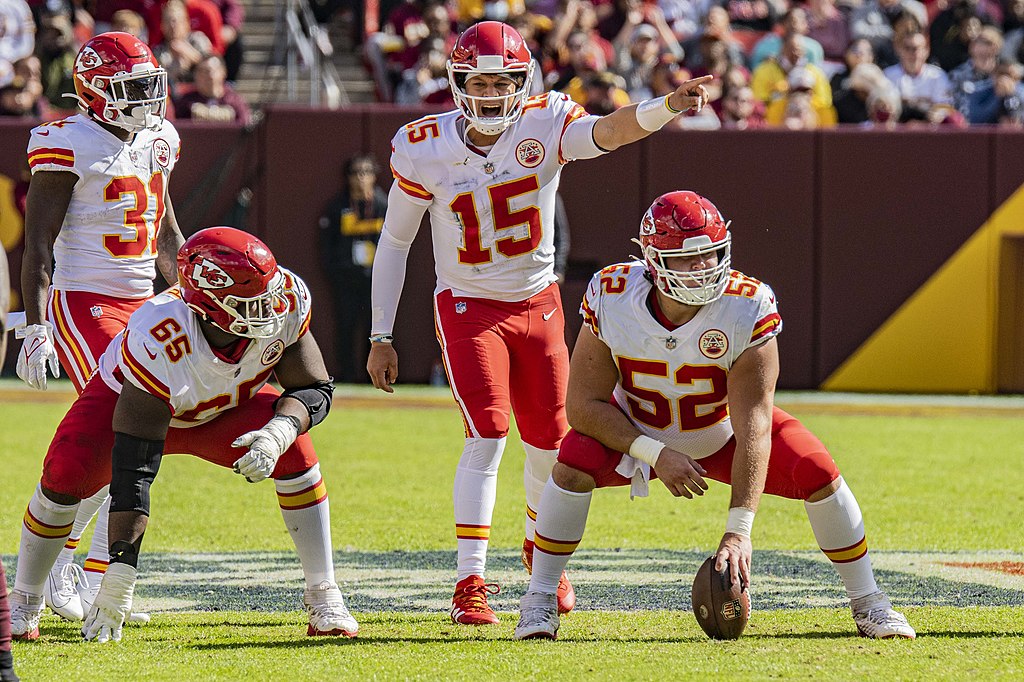 This phenomenal athlete from Tyler, Texas has been the face of the Kansas City Chiefs over the last four seasons. The four-time Pro Bowler has turned out to be one of the game’s finest quarterbacks and is the primary reason why the Chiefs have had so much team success recently.

Mahomes was also selected to the Pro Bowl for the fourth straight season. The Chiefs won the AFC West with a record of 12 wins and five losses. In the postseason, the Chiefs made the NFL playoffs, and faced the Cincinnati Bengals in the AFC Championship but lost 27-24.

A multi-sport athlete, Mahomes was an impressive pitcher at Whitehouse High School in Texas, and was selected in the 37th round by the Detroit Tigers in the 2014 Major League Baseball Draft. Patrick’s father Pat pitched 13 seasons in Major League Baseball with the Minnesota Twins, Boston Red Sox, Texas Rangers, New York Mets, Chicago Cubs and Pittsburgh Pirates.

In his college career, Mahomes played three seasons at Texas Tech from from 2014 to 2016. In 2016, Mahomes led all quarterbacks who were playing in major colleges in the National Collegiate Athletic Association in passing yards with 5052.

In 2017, Mahomes was drafted in the first round, 10th overall. He was the second quarterback selected in the 2017 NFL Draft, behind Mitchell Trubisky of the Chicago Bears.

After being the backup to Alex Smith in his rookie season, Mahomes took over the starting job in 2018, and has never looked back. He has won 49 of 62 games with the Chiefs over four seasons. Mahomes has completed 1550 passes in 2345 attempts for 18991 passing yards, 151 touchdowns and 37 interceptions. On the ground, Mahomes has 238 rushes for 1189 yards and eight touchdowns.

Mahomes’s finest season came in 2018, when he was the Associated Press Most Valuable Player. Mahomes completed 383 passes in 580 attempts with 50 touchdowns and 12 interceptions. He led the NFL that season with 50 touchdown passes and a quarterback rating of 80.3. In 2020, Mahomes also led the NFL with 316 yards per game.

In 2020, Mahomes guided the Chiefs to a Super Bowl title and was named Super Bowl MVP. In Super Bowl LIV, he completed 26 of 42 passes for 286 yards and two touchdowns, and had nine rushes for 29 yards and another major score.

Mahomes is the engine of the Chiefs this season, and will now have a new receiving group, as he will be passing to Marquez Valdes-Scantling and JuJu Smith-Schuster. Both were off-season free agent signings–Valdes-Scantling from Green Bay and Smith-Schuster from Pittsburgh. With the new wide receivers in Kansas City, there is familiarity at tight end, as Travis Kelce is the best in the business. The Chiefs are in for a challenging season, as the AFC West will be the toughest division in the NFL.