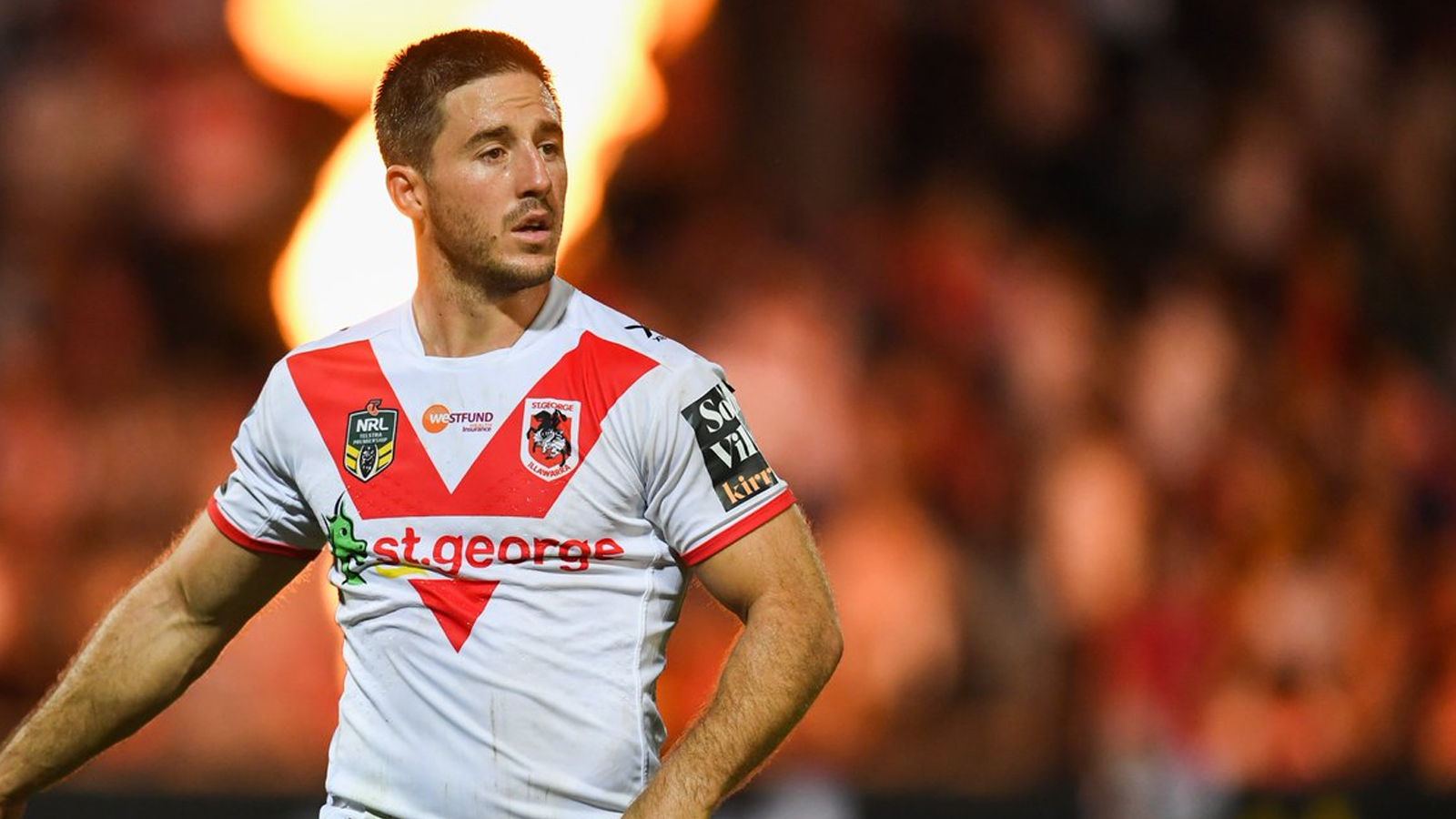 New Dragons coach Anthony Griffin appears to have pulled off a stroke of genius at the Red V; crowning the club’s $1 million dollar man, Ben Hunt, team captain seems to have got the under-siege Queensland superstar back to his brilliant best.

There’s always been one key message surrounding the bereft St George outfit that only just managed to stave off a venture-first wooden spoon last season: get rich-money halfback Ben Hunt back on track, in a big way, and everything else will turn out okay.

In Townsville on Saturday night, the rugby league world saw why.

Hunt, now four years into the half-decade deal he inked with the Red V back in early 2017, was at his electric best against an underperforming North Queensland outfit. Every aspect of his play sizzled; the star’s running game was top-notch, he was immense in defence, he guided the team around the park with ease, and the crafty halfback even popped up for a try in the 53rd minute.

The 30-year-old was, quite fairly, crowned best on ground in the nail-biting 25-18 contest. Hunt, more than anyone else, had earned the Dragons their first two points of the 2021 season.

Maybe the best I've seen Ben Hunt play in the #redv yet. Captaincy looks pretty good on him so far #NRLCowboysDragons

It was like a prophecy coming true on Saturday evening telly.

Hunt’s slick play pulled the rest of the Red V into his wake.

Right side attack Mikaele Ravalawa and Zac Lomax benefitted with a try each, and hulking prop-turned-second row machine Josh Kerr barrelled over a half-hour in too. With Ben Hunt pulling the strings, St George lit up the park.

Then there was the team’s resilience in the face of ever-mounting errors.

Neither side covered themselves in glory when it came to completed sets. It provided very entertaining footy, yes, but both coaches were — as Andrew Voss put it — on “the world’s worst rollercoaster.”

In the past, the Dragons have followed Hunt’s attitude. If the halfback’s head dipped, his clubmates followed. After every momentum-breaking error, Hunt would retreat back into himself. The rest of the team would follow soon after.

This time, in Townsville, Hunt was the heart of the stability.

Even as the Dragons racked up a hefty 13 errors, and ran home just 76% of their sets, the playmaker didn’t let it break his cool. Hunt was in the middle of the park, cold as ice.

At one stage, the Fox Sports cameras caught him carefully watching the Cowboys ahead of their impending set. Lock forward Tyrell Fuimaono had just lost the ball. But Hunt looked like he was on a Sunday afternoon stroll. The pressure, and there was lots, hadn’t phased him at all.

This is the masterstroke Hook seems to have pulled off — when the going got tough, Ben Hunt did what Dragons fans have wanted to see him do since early 2018: answer back. Stand up and be counted. 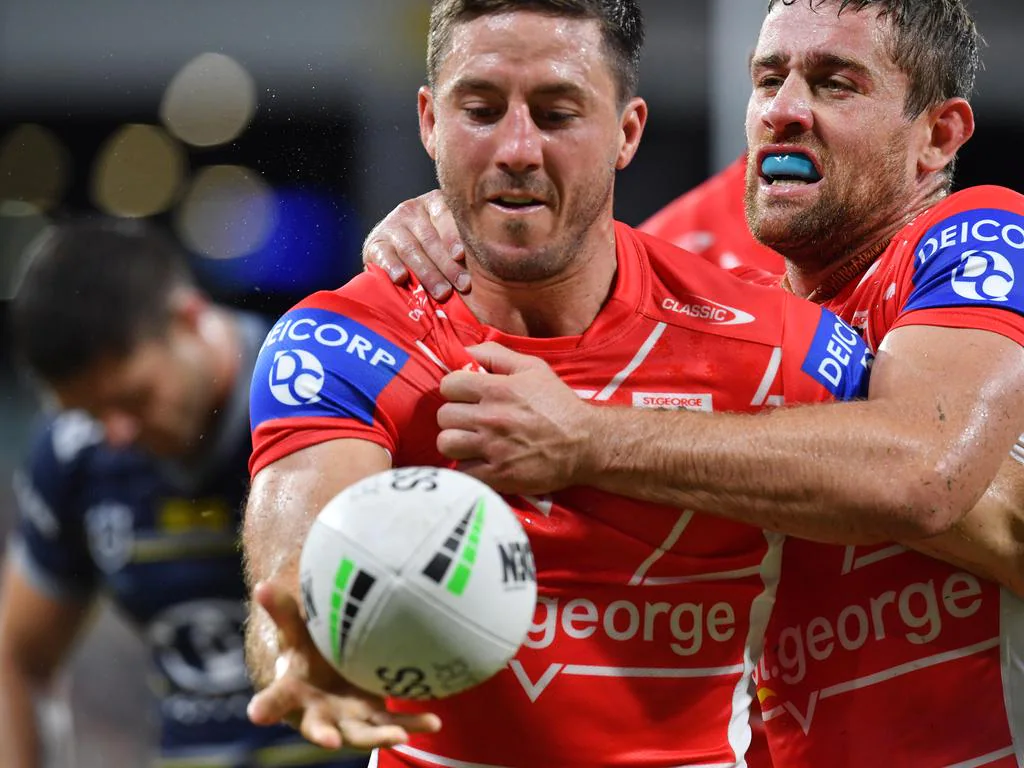 Anthony Griffin, who made the bold call to crown the beleaguered halfback his club captain for 2021, said he was proud of Hunt’s “true captain’s knock” in the team’s first win of the year.

“I was really pleased for him to get his first win being the captain. He got that try for us to go ahead again – it was a typical captain’s try. He took the line on and did it himself,” the new St George coach said.

Hunt, and halves partner Corey Norman, were “great” on Saturday, he added.

“They just helped each other. That’s what you expect them to do too. They’ve both got a lot of experience so you want them in tight games like that to get you over the line,” Griffin said.

“I thought their kicking game was great. Corey, for his first hit-out [of the season], was really good. They had some nice touches together. We’re just got to get more football and more combination out of them.

“[Ben] is a really tough competitor. Tonight some of his big plays in defence were enormous. It was a really good captain’s knock. They all played for each other and he led that.”

Hunt himself was all smiles after the seven-point win — as much as he ever is. He’s grateful, he added, that Hook had chosen to “put faith” in him even after a few lean years at Kogarah.

“He’s really backed us to lead this team around and we’ve had a big pre-season,” he said.

“[The captaincy] has just made me look around the team, help everyone out. I just want to take it to another level, really contribute to the team. I’ve always tried to do that, but I’ll try and do it, even more, this year, definitely.

“We knew we weren’t going to hit the ground running completely clean and we’ll keep building and building. And tonight was another good step.”

The NRL world has gone mad in the past fortnight over lopsided scores, struggling franchises, and the speed of the game The question we\'re left wondering is, why Other sporting codes have bad teams Read More