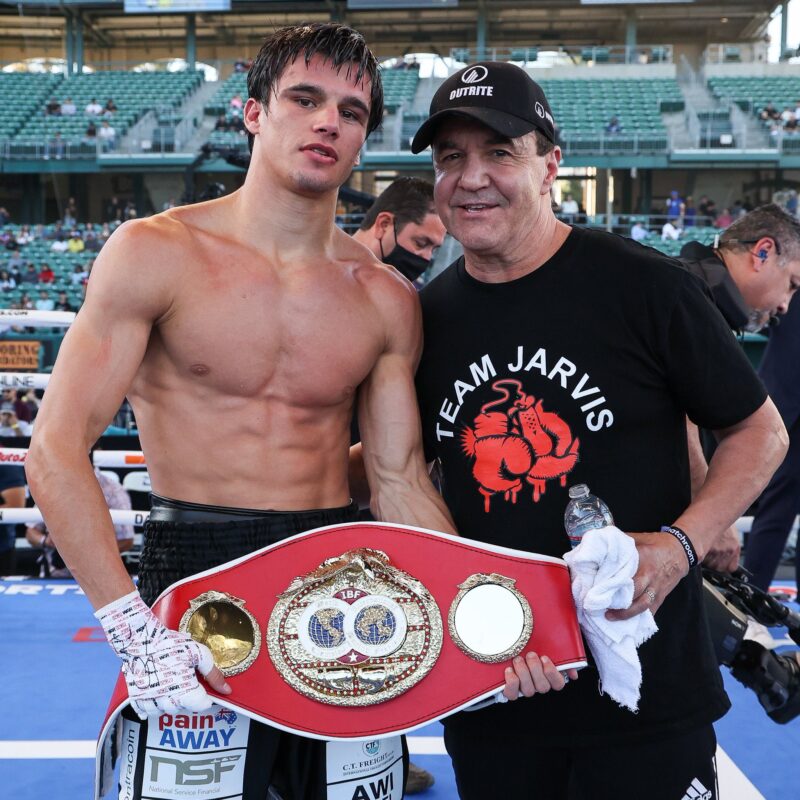 Australian boxing sensation Brock Jarvis overcame adversity in the second round to secure a fifth-round TKO victory over Alejandro Frias Rodriguez in California to win the IBF Intercontinental Lightweight title.

After signing a deal with Matchroom Boxing, its chairman Eddie Hearn was eagerly watching ringside to see what the Aussie had to offer.

With a routine first-round, as Jarvis looked to work his opponent on the inside, the second smelt danger. Jarvis found himself in trouble after Frias caught the 23-year-old on multiple occasions.

HOW DID BROCK JARVIS STAY UP! 🤯 pic.twitter.com/RrXwYJ2iNd

So much so, the Sydneysider could barely stay on his feet and Dazn’s Chris Mannix claimed the fight could have been stopped, even going on to say there should have been a knockdown with Jarvis appearing to be held up by the ropes.

He survived the onslaught as Frias didn’t look the same in the following rounds. The Mexican using all his energy, with most of his total punches coming in the second round.

With a barrage of punches in the fifth, Jarvis forced the referee to call an end to the fight, as Frijas was unable to defend himself but still on his feet, leading fans to boo the Australian in his post-fight interview.

“I’ve got a lot to work on and I’ll just keep working on it,” Jarvis said post-fight.

“He caught me with some big shots but in times like that, you’ve got to dig deep and show what you’re made of.

“I hung in there and I kept working to get the win. I came here to win and win at all costs, a bit of adversity is not going to stop me.”

Fox Sports’ Ben Damon tweeted after the fight that Jarvis’ team is open to a rematch with Frijas as Hearn is keen for the Aussie to stay in the states to fight on the Teofimo Lopez vs George Kambosos Jr undercard.

Just spoke to Jeff Fenech who says Eddie Hearn wants Brock Jarvis to stay in the US to fight on the #LopezKambosos undercard. Alejandro Frias Rodriguez’s team have asked for a rematch and Fenech/Jarvis are happy to do it if that’s what Matchroom decides #JarvisFrias #GarciaMartin pic.twitter.com/jUdWTPW09a

It looks like we will see Jarvis return to the ring very shortly, with fans hoping the Aussie can assert his dominance once again while minimising any damage that was taken in today’s fight.