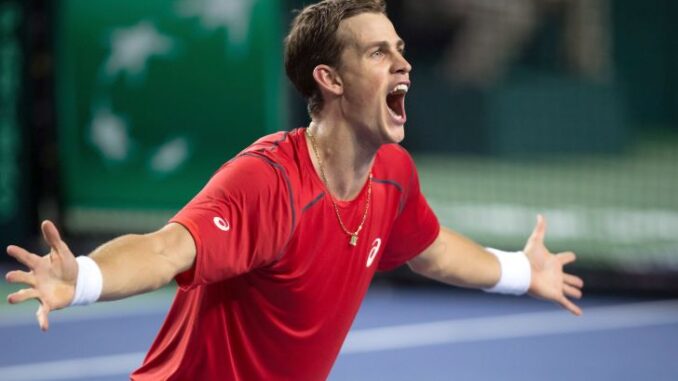 We now know the two nations joining Australia and Croatia in the semifinals of the 2022 Davis Cup in Malaga, Spain. On Thursday, Canada beat Germany 2-1 and Italy beat the United States 2-1. Both ties needed a doubles match to determine the winner.

The Italian men’s doubles team of Fabio Fognini and Simone Bolelli beat the American duo of Jack Sock and Tommy Paul 6-4, 6-4, after Italy and the United States won one singles match each. Many know Fognini as a singles specialist, as he was a career-best ninth in the world in 2019. However, what many may not know is he has had great success over the years in doubles too. In fact, Fognini and Bolelli teamed up to win the 2015 Australian Open. They beat the French duo of Pierre-Hugues Herbert and Nicolas Mahut 6-4, 6-4 in the final. Italy’s singles win on Thursday came from Lorenzo Sonego, as he defeated American Frances Tiafoe, 6-3, 7-6.

The Canadian men’s doubles team of Vasek Pospisil and Denis Shapovalov beat the German men’s doubles team of Kevin Krawietz and Tim Puetz 2-6, 6-3, 6-3. The win by the Canadians was significant because Kraweitz won the 2019 and 2020 men’s doubles final at the French Open with fellow German Andreas Mies. The fact this men’s doubles match took place on an indoor hardcourt rather than outdoor clay, clearly benefitted Team Canada. The Canadians got a victory in singles on Thursday from Felix Auger-Aliassime, who continued his red-hot fall with a 7-6, 6-4 win over Oscar Otte of Germany.

The winner of the Australia/Croatia tie on Friday could have an advantage on Sunday’s final. That is because they have a full day of rest, while Canada or Italy will play the second tie of a back-to-back on Sunday.