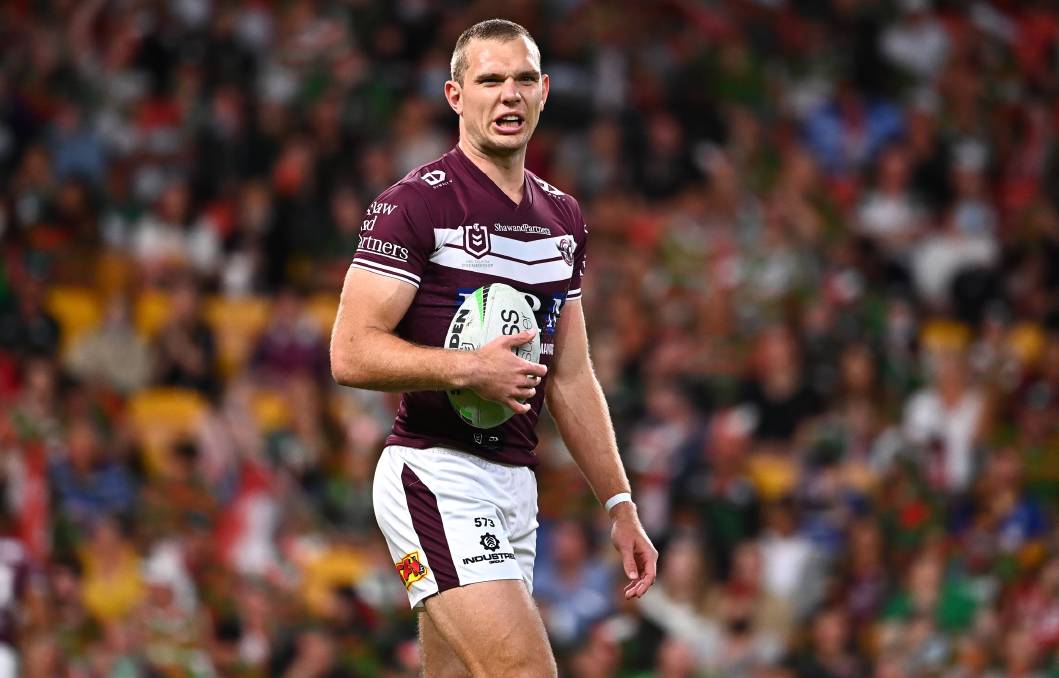 Tom Trbojevic has slammed suggestions his Manly Sea Eagles are a “one-man team” that struggles to play up to NRL standard when he’s not leading them around the park like in his sensational campaign last year.

Tommy Turbo enjoyed one of the most brilliant individual seasons rugby league has seen in quite some time last season and was crowned Dally M Medalist for his immense Manly efforts.

The fullback’s return in round six of the 2021 NRL season sparked a renaissance for the club. They had won just one game in five before his return — their singular victory came in round five — and he announced his arrival at the forefront of a 36-0 demolition of the Titans. It was a trend that would continue all the way through to Manly’s preliminary finals exit.

For many, it pointed to a serious problem at the Sea Eagles. The north Sydney maroons managed just a handful of wins. When he was rested in round 23 they barely scrapped a 19-18 win over the fast-fading Canberra Raiders away from home.

Don’t call Manly a “one-man team” though, Trbojevic says. The club struggled without him in 2021, yes, but there was plenty that went into, and his freak season isn’t one that comes around every year.

“That’s definitely unfair to say it’s down to me,” he said. “There are a lot of very good footy players in this team and there are a lot of variables that go into us winning games. We have had some tough years [previously] and that just drives you to keep getting better.

“I enjoyed the thrill of last year but we still have to get better to beat those top sides.

“Obviously you get judged on individual performances but we want to get better as a team. I’m not looking at it as an individual. You obviously want to play well but you want to win and if you’re winning games, that’s what we’re ultimately here to do. It’s not about me individually reaching those heights again – it’s about us winning footy games.

“Everyone wants to get better and that’s what we’re here to do,” the silvertails star added. “I just know what I can do within this team, as does everyone else, and hopefully, we can show everyone.”

Trbojevic’s immense 2021 has put something of a target on his back heading into round one. Manly are drawn up to play Penrith and Turbo knows all eyes will be on him from the word ‘go’. There was already that “pressure,” he said, but the Dally M medal and expectations for him to outstrip his own performances are only adding to that fever.

“That pressure comes with what we do,” he admitted.

“We are in an industry where you have to win games to silence everyone and release those pressures. I lot of people in this industry have that [mental toughness], that’s why they’re here. You’re competing against the best. You’ve got to keep finding ways to improve. You can’t rest on your laurels, you’ve got to keep getting better and find ways where you can help your team more.

“You want to keep being successful, keep winning footy games and keep playing good footy. That’s not going to change this year. I love playing the game, I love representing Manly. I love this club.”

Saturday metropolitan racing heads back to Randwick with 10 races to be run and won, we are expecting an advantage to horses that will settle off the rail in run and in lanes 3+ in the straight on Read More
NBA