We told you to expect fireworks.. We told you there was bad blood.. But NO-ONE would have predicted the aftermath of the Khabib v McGregor fight.

UFC 229 will go down as the most talked about pay-per-view in history. McGregor was returning from a two-year UFC hiatus in an attempt to displace Khabib Nurmagomedov as the 155-pound title holder and in doing so, bring Khabib’s undefeated record to an end, but that isn’t how it panned out.

The sold-out crowd in the T-Mobile Arena were on the edge of their seats as soon as McGregor entered. The “Notorious” looked right in the zone and ready to battle, while Khabib took a more subdued approach. Match referee Randy Herb called the combatants to the centre of the octagon, told them of his expectations and called for them to touch gloves.. The opponents were having none of that!

McGregor landed a nice shot to get proceedings underway, but then Khabib ankle picked McGregor and had him on the ground less than a minute into the first round. Khabib refused to allow McGregor the opportunity to get back to his feet and they spent the first round on the mat with a ground and pound between both fighters inside the final minute.

Round two began the same way the opening round closed. Khabib landed a big shot early which caused McGregor to falter which gave Khabib the opportunity to again take down McGregor. The Irishman had no option but to lay on his back whilst the Russian landed a series of blows with his hands and elbows. Khabib looked set to place McGregor in a kimura lock but the “Notorious” was able to slip out of it and find his feet. With 45 seconds remaining both fighters were standing with Khabib pinning McGregor against the fence until the siren sounded.

McGregor looked to gain the upper hand in the third round, he was able to control Khabib and put some nice combinations together, forcing Khabib to retreat and attempt to evade the blows. The two opponents found themselves trading shots in the middle of the octagon, not where Khabib wanted to be, but he managed to hang in there with the third round ending shortly after.

After three rounds it looked to be 2-1 in favour of Khabib but the match was only just heating up. McGregor needed to find a way to win the fight with a trademark punch or kick. Khabib again managed to take McGregor down, this time he had McGregor in a rear-naked choke. There was no way Khabib was letting this hold slip. He tightened the vice leaving Conor McGregor with no option but to tap, a move that ended the fight.

Khabib, the grappling machine was methodic and thought out the fight so well, until the fight ended and he lost his mind. Khabib’s emotions boiled over, he dislodged his mouthguard and threw it at the McGregor team. Before you could blink, Khabib had leapt over the fence and was assaulting McGregor’s family, friends and training partners – A riot had broken out.

Khabib’s support team entered the octagon with one person landing a blow to the back of McGregor’s head, the Irishman was completely unware and startled. The PPV fans were left to witness the mayhem from a very long range camera shot, unable to see what was unfolding.

It was such a shame to see a brilliant battle marred by such poor scenes following. Several minutes passed with security and police trying to settle everyone down, eventually McGregor left the ring with his support team. Khabib was in the middle of the octagon pleading with officials to hand him his belt but he and his team were also quickly removed from the arena. Once the tension had simmered ringside announcer Bruce Buffer declared Khabib the winner in the fourth round by submission and still the 155-pound champion.

Khabib had gained so much respect by winning only to lose it instantly.

Tell us your thoughts on our social media platforms – Twitter, Facebook and Instagram. Should Khabib be stripped of his title? Will a hefty fine and suspension be applied? Follow The Sporting Base for all the latest news, all sports in one place.

Scroll down to see how the controversy unfolded. 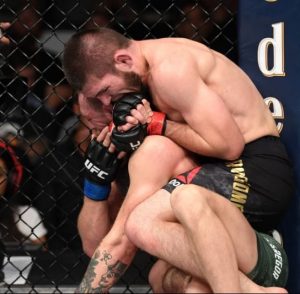 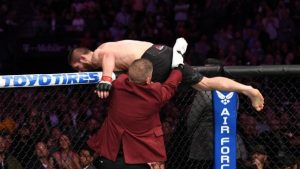