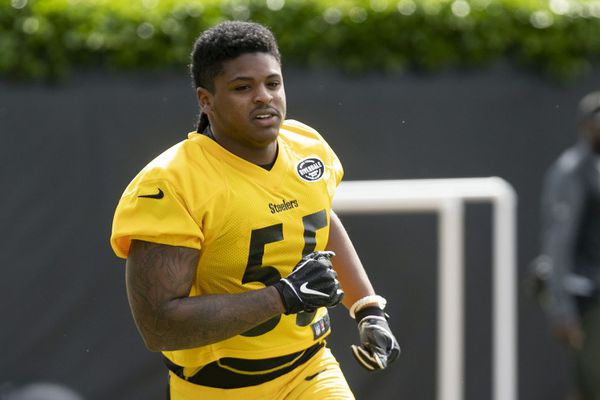 With the NFL back in full swing, we thought it was only fitting that we have linebacker Devin Bush Jr as our Future Star Of The Week.

Bush was born in 1998. He is the son of Devin Bush, who played at the safety position in the  NFL from 1995 to 2002. Bush grew up in Pembroke Pines, Florida, where he attended Charles W. Flanagan High School.

In December 2015, Bush rejected a scholarship offer from Florida State, where his father played, and committed instead to play college football for the Michigan Wolverines football team. In February 2016, Michigan hired Bush’s father as a defensive analyst for the football coaching staff.

Bush enrolled at the University of Michigan in the fall of 2016. He appeared in all 13 games as a freshman for the 2016 Michigan Wolverines football team.

He earned a reputation as the hardest hitting player on the Michigan team.

Bush was drafted by the Pittsburgh Steelers 10th overall in the 2019 NFL Draft. The Steelers originally acquired this selection in a trade with the Denver Broncos, trading their first round selection (20th), their 2019 second round selection, and 2020 third round pick to Denver.

Devin has shown elite range and instincts in the early parts of this season which could see him emerge as a Pro Bowl-caliber player during his rookie season which is why he is clearly our Future Star Of The Week.

See the links below to find all of the best prices on up and coming NFL fixtures.