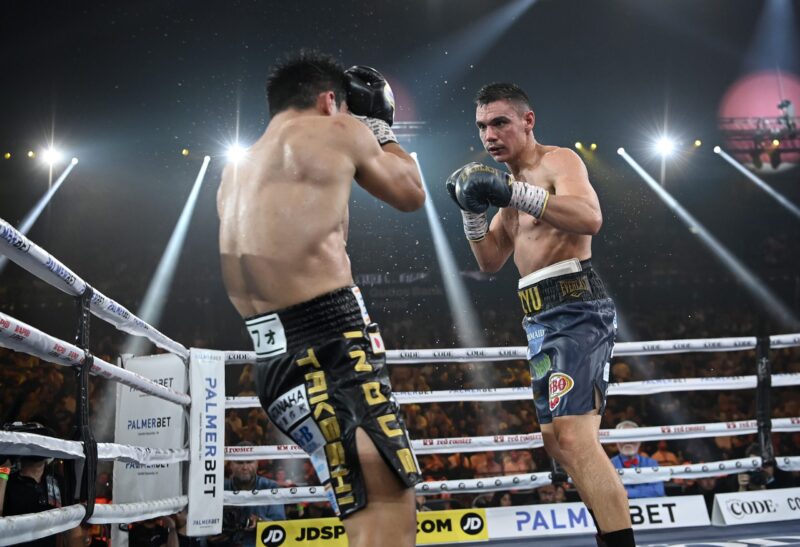 Tim Tszyu returned to Sydney with one of the best performances of his career. While taking Japan’s Takeshi Inoue the full 12 rounds, the Australian showcased his constant pressure which suffocated his opponent.

It was a pure masterclass from the 27-year-old super-welterweight who was named the mandatory challenger for Brian Castano’s WBO title. It now begs the question, what’s next for Tim Tszyu?

Last night’s fight was only missing a knockout. Inoue was unable to withstand the constant barrage of punches by Tszyu and was often seen wincing from body shots.

The Australian did manage a knockdown in the final round, the first of Inoue’s career. The biggest talking point now is how important those 12 rounds were for Tszyu in his run to the title.

Before the fight, he had an average stoppage of 4.37 rounds compared to Inoue’s 5.65. Many believed Tszyu could finish Japan’s best super-welterweight but as the 27-year-old said in a post-fight interview, “the guys built like a brick wall”.

Inoue was incredibly impressive. Despite being on the backfoot for much of the fight, he stayed in the fight and wouldn't go down #ozboxing #boxing

If Tszyu’s next challenge is to take on Castano, then the 12 rounds against Inoue will be anything but detrimental to his career. It will certainly set the Australian up for what will be a tough task against a difficult Argentinian who arguably beat Jermell Charlo in a unification bout.

An interesting strategy for Tszyu is to take another ‘warm-up’ fight before enforcing a challenge for the WBO title – which all depends on whether the organisation sets a strict time frame for the fight. With Charlo and Castano going the distance and the bout ending in a draw, there is a high possibility that they will meet again to settle the score.

It means Tszyu could be waiting on the sidelines. But not every setback is negative and the Australian could potentially be fighting for four world titles instead of one, regardless of who wins the belts. If the fight does happen and the victor decides against vacating the belts along with the WBO requesting the challenge to take place, then Tszyu could be set up for more glory.

Right now it’s all about hypotheticals and uncertainty but for Tszyu the options are endless.

Meanwhile, on the undercard, like Tszyu, Gunnedah’s Wade Ryan, faced a Japanese super-welterweight of his own in Nath Nwachukwu. Going the full 10 rounds, one of the judges scored the contest 100-89 with the remaining cards reading 99-90 and 98-91.

Ryan was too good on the night and despite the showboating from his opponent, it was a clinic in southpaw boxing. He even earned a knockdown and forced Nwachukwu’s eye shut with the doctor called to check the damage in the eighth round.

In the other fights on the night, Dennis Hogan went the distance with Australian boxing legend Tommy Browne. After 52 career fights, Browne called an end to his illustrious career saying to Ben Damon “I think that’s it for me”.

Koen Mazoudier was back in the winner’s circle after losing to Ryan in March. He beat veteran, Joel Camilleri by a tight split decision. While Camilleri showed his experience early in the bout, Mazoudier found his range in the later rounds and was able to win over two of the judges’ scorecards to claim the victory.

Alex Lual controversially went down to Trent Girdham who knocked the 21-year-old Final Round Gym product in the very first round. Replay footage showed it was his forearm that hit the top of Lual’s head instead of with his gloves. It means Girdham moves to 3-0 and Lual to 2-1. A rematch would be a touch of class from Girdham with the judges’ scorecards way too wide for how the fight actually panned out.

In the final fight before the main card, Benjamin Hussain picked up a unanimous decision win against Darwin Sagurit with each judge recording 39-37 scorecards. It moves Hussain to 4-1 in his career in a tough fight for the Queenslander who was Tszyu’s sparring partner for the Inoue camp.

Tim Tszyu’s showdown with Japan’s Takeshi Inoue will be the biggest test he will face to date He is on the brink of fighting for a world title but wants to remain active, instead of waiting for a Read More