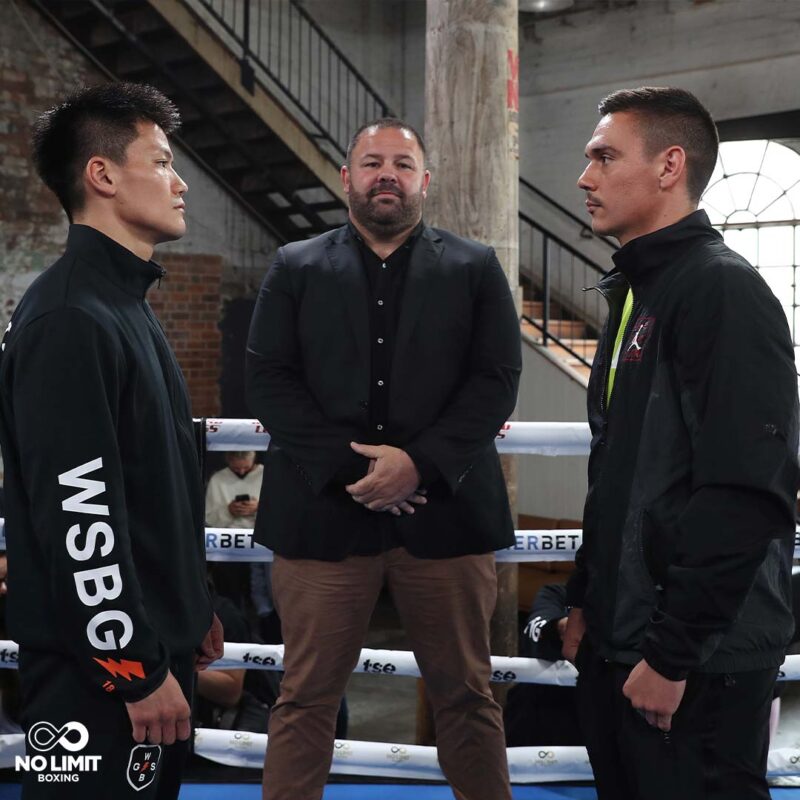 Tim Tszyu’s showdown with Japan’s Takeshi Inoue will be the biggest test he will face to date. He is on the brink of fighting for a world title but wants to remain active, instead of waiting for a fight.

It was revealed in August that the WBO made Tszyu the mandatory challenger for Brian Castano’s super-welterweight belt and while a fight with the Argentine would have to take place next year, Tszyu and his promoters No Limit Boxing were hopeful of landing a fight with former world champion, Tony Harrison.

Their hopes did not eventuate and here we are with Tszyu facing Inoue on Wednesday night at the Qudos Bank Arena in Sydney.

Tim Tszyu: “Muscles don’t win fights, I’m going to be 10 steps ahead of him” #TszyuInoue pic.twitter.com/6Q3NK7xBtI

While it is a home fight for Tszyu, he knows how difficult the task will be. Inoue has already fought for a world title when he went down to Jamie Munguía via a unanimous decision in 2019. It shows the level of opposition on display next week.

As for the 27-year-old, Tszyu, it’s not like he hasn’t been in this position before. He finished former world titleholder Jeff Horn last year who controversially beat Manny Pacquiao to win the WBO belt.

Another significant victory was against Dennis Hogan in March, finishing the Irishman in the fifth round. It’s important to note that Hogan was coming off two world title fights, one with Munguía and another with Jermall Charlo.

Wednesday marks another step in Tszyu’s path to a world championship with the aim of equaling his father Kostya’s glory.

If he can beat Inoue and do it in a dominant fashion, he could put the world on notice, if they are not already paying attention.

Speaking to Fox Sports Australia, Tszyu is not looking to grind out a victory.

“I’m not a tipper-tapper and touch-around fighter, I’m there to do damage,” Tszyu said.

These are words from a fighter with one aim and that is to get in and out of the ring as soon as possible. Tszyu’s 15 knockouts in his 19 career fights speak to this and according to the Australian, Wednesday will be no different.

“He thinks it’s going to go to the later rounds, but it won’t,” Tszyu said.

“And if it does, I feel sorry for him because it’s going to be a total punishment.”

Inoue also spoke to Fox Sports through a translator saying the fight “will be a knockout”, continuing with his aim to once again challenge for a world title.

A sample of the unique training methods from Takeshi Inoue.

The Japanese wildcard has arrived in Sydney in peak physical condition, ahead of his clash with Tim Tszyu next Wednesday.#ozboxing #boxing pic.twitter.com/Ql0BlknP3j

He added: “I’ve watched his five most recent fights. His guard is not so strong, so I think I can land a big punch on him.”

“Another weakness he has is his lack of experience in fighting the bigger opponent and physically I think I’m bigger and stronger.

“I came to win this so I can challenge for the world title again.

“Towards the end of the fight I will break his spirit and then knock him out.”