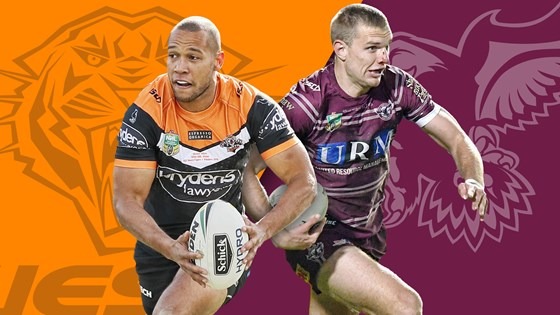 This is a game that the Tigers need to win and need to win convincingly. At Campbelltown, in front of their home supporters, the script couldn’t get any better for the Tigers to win. Mathematically they can make the finals if they win their remaining games and if they can post 13 plus points in all of them. Points differential is now their enemy as the Tigers missed the chance to make it easier to get into the top 8 after losing to the St George Illawarra Dragons 20-10 last weekend in Leichhardt. The players to watch for the Tigers are Benji Marshall and Chris Lawrence. These two veterans can lead a team to a victory with their experience. They need to step up and put the young players in the right direction. If they can do that, the Tigers will play like their hearts depend on it and everybody will be ‘on the bus’.

Manly, on the other hand, has had a week to forget, from news reports outlining there is a rift between coach Trent Barrett and Chairman Scott Penn. Since 1998, The Tigers and Manly have fought 26 times and Manly has won 15 of those 26 matches. Stats prove that Manly have a great record to win at Campbelltown but I think the circumstances around the club will prove too much of a factor. The players to watch for Manly are the Trbjovejic brothers. These two are considered to be the heart and soul of Manly at present. If they play like they have been playing and the other players follow suit then we might see an upset on the cards. Manly needs an all team effort not just relying on the brothers to do something.