Cronulla Sharks Vs Penrith Panthers Preview: Both Teams Are Desperate To Win 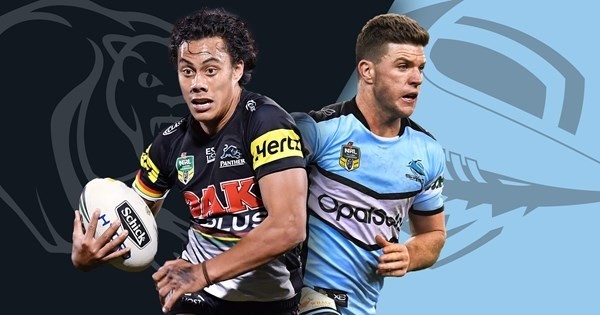 Both teams are coming off tough loses this week but a good performance here could see either team climb the ladder and see themselves back in premiership contention.

A pair of gut-wrenching losses sees the Sharks and the Panthers duel on Thursday night with a potential spot in the top eight up for grabs.

Cronulla’s miserable 30-16 loss to the Roosters has seen the Sharks drop all the way down to ninth on the ladder, while the Panthers’ shortcoming against the Titans leaves Penrith sitting 11th with just two wins from five.

Last year these sides met on three separate occasions with Cronulla adding to their impressive seven game winning streak. Sharks fans will hold fond memories of last year’s narrow one-point win in week two of the finals, but as the stats show, a lot needs to change on defence.

The Sharks were caught flat footed for most of the game as the Roosters picked apart their back line with clever kicks. A 30-0 deficit was made a little more respectable with a trio of late tries, but really, Cronulla’s defence in the dying stages of the first half cost them the game.

As for the Panthers, luck just wasn’t on their side. The Titans stretched apart Penrith’s goal line defence for two early tries before Michael Gordon added another right before the half.

The good news for the Panthers is the Sharks don’t possess quite the same explosive forward line.

Sharks: Paul Gallen (ribs) is back to bolster the pack in the only change to the starting side from  last week’s loss to the Roosters. Jack Williams goes back to the bench after starting for Gallen last week and Braden Hamlin-Uele drops to the reserves.

Panthers: Representative prop Reagan Campbell-Gillard has been relegated to the bench and his place in the starting line-up taken by Tim Grant, who returned from injury last week in Canterbury Cup. Wayde Egan returns from concussion in the hooking role with Sione Katoa reverting to the bench. Isaah Yeo has been cleared of a shoulder injury and will play.

Stream Every Game Of The 2019 Telstra NRL Season Live & On Demand With Kayo – Start Your 14 Day Trial Today!

During the Kobe Bryant memorial service on Monday at Staples Center in Los Angeles, California, there were many recognizable names who delivered memorable speeches The list included Michael Jordan, Read More
Horse Racing

We\'re looking to build on a huge weekend where we secured 17 units of profit for our followers We\'re very confident we can do it with today\'s selection Kumasi - Gosford Race 2 Trainer: Read More
BASEBALL

The San Diego Padres signed second baseman Brian Dozier of Fulton, Mississippi to a minor league contract according to ESPN on Monday If Dozier is able to crack the Padres lineup in 2020, San Diego Read More