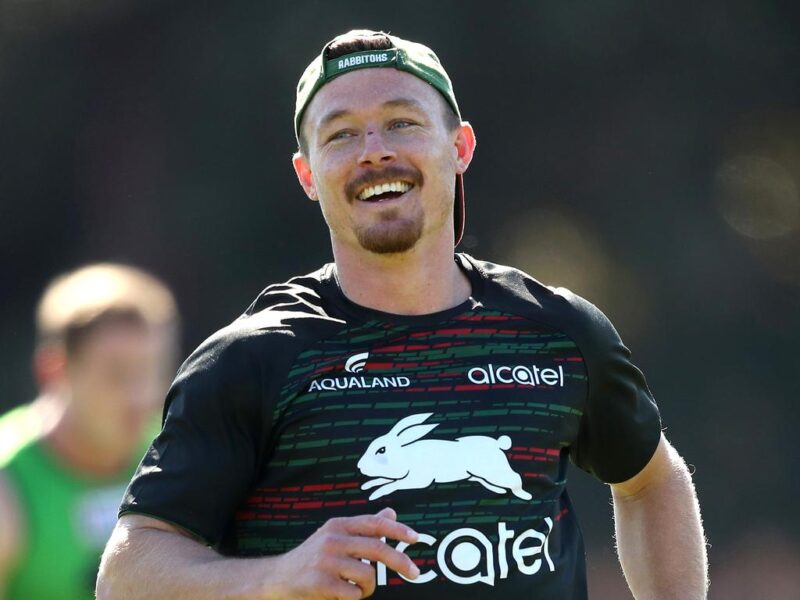 Although South Sydney’s coaching staff had planned to rest star hooker, Damien Cook, for their upcoming clash with rivals the Sydney Roosters, the 30-year-old has asked to be named to the squad.

While he is listed as the no.9 on the team sheet, South Sydney was hoping to save Cook’s legs as the team heads towards the finals with the hooker picking up a right quad injury in the Rabbitohs match-up with Penrith last week. There are two games remaining in the regular season and the club clearly doesn’t want to risk losing one of their key players.

In the lead-up to Friday’s derby at Suncorp Stadium, Cook underwent recovery training for his quad.

Damien Cook got through a conditioning session as he hopes to overcome a quad strain to play this week. Final test is getting through captains run & pulling up well, at this stage he is confident it will hold up. But admitted he won’t play if he isn’t 100%

Souths already know their fate – they sit comfortably in third on the NRL ladder with an outside chance at leapfrogging Penrith in second. The Panthers face the Wests Tigers and Parramatta Eels in their last two games and are hoping for the Storm to slip up at the top of the ladder.

If coach Wayne Bennett is wanting to have a full-strength outfit in the finals, resting Cook is the right idea.

As for the Sydney Roosters, Sam Walker returns to the halfback position after being dropped to the bench against the Dragons last weekend. The young no.7 scored a try in the second half as the club went on to triumph 40-22 at the Clive Berghofer Stadium.

The eastern Sydney club has been handed plenty of roadblocks throughout their 2021 campaign with several injuries to their star players. It highlights the Roosters’ depth at the club but also coach Trent Robinson’s faith in his playing squad.

The game is scheduled for 7:55 pm as South’s forwards Cameron Murray and Jai Arrow celebrate their 100th game in the NRL.

Looking around the league, Manly fullback Tom Trbojevic is tipped to return after being rested against the Canberra Raiders last week. The Wally Lewis medal winner at this year’s State of Origin was at risk of being ruled out for the season with an apparent cheekbone fracture but Trbojevic and Manly denied these rumours last week.

Tom Trbojevic won’t play this week, Manly still insist no fracture present in cheekbone & should be back next week (via @Danny_Weidler). Absence mostly precautionary in that case, swelling around existing plate can be easily aggravated. Week off will allow to settle significantly

Ash Taylor on verge of taking up Warriors lifeline for 2022, will accept monster pay cut