NRL Rookie Watch: Which Titans are worth keeping an eye on in 2023? - The Sporting Base
0

NRL Rookie Watch: Which Titans are worth keeping an eye on in 2023? 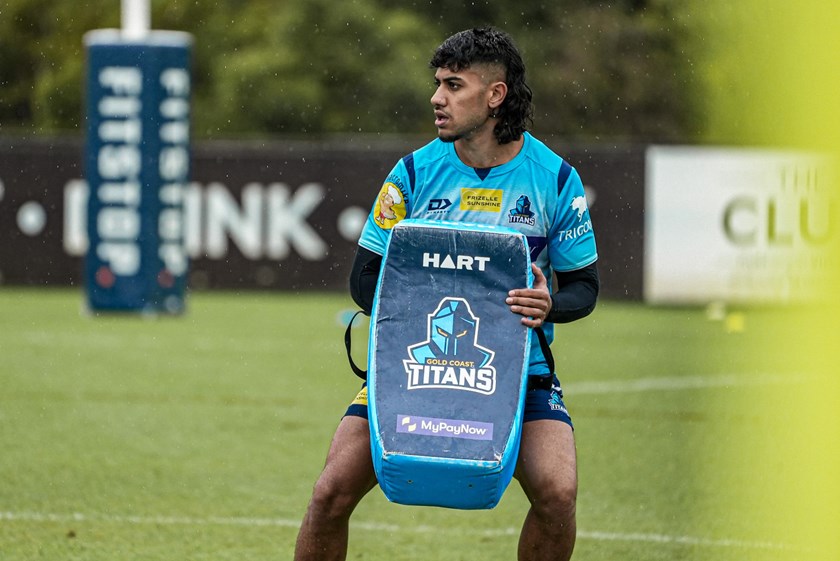 With the 2023 NRL season nearing, we list the crop of rookies from each club worth keeping tabs on as they aim to join the elite list of budding stars with a Rookie of the Year award to their name.

A plethora of NRL talent has been brought through the southeast Queensland region which has proven such a valuable rugby league nursery with the Titans hoping several of their youngsters can offer the side a boost in 2023. 21-year-old Alofi’ana Khan-Pereira enjoyed a breakout Queensland Cup season for Burleigh last season scoring 25 tries in just 19 outings including three hat-tricks and a four-try effort against Mackay. A winger with serious speed to burn, Khan-Pereira’s penultimate performance of last season ended with him scoring three tries, running for 296 metres, and breaking four tackles in a win over Central Queensland. There has been chatter that head coach Justin Holbrook is considering handing Khan-Pereira an NRL debut in the Titans’ Round 1 clash against the Wests Tigers with Greg Marzhew, Corey Thompson, and Jamayne Isaako all now elsewhere and Brian Kelly suspended.

A rangy back-rower, Jacob Alick made his international debut for Papua New Guinea in mid-2022 before enjoying a strong World Cup campaign with the Kumuls in the UK. The 23-year-old proved a consistent fixture in Burleigh’s Queensland Cup last year starting in 20 games and scoring seven tries. A capable big-minute player, Alick earnt a reputation as a workhorse at Burleigh playing 70-plus minutes in all but two games last season. One of his best outings came against the Hunters in Round 5 where he ran for 164 metres, came up with five tackle breaks, made 25 tackles and assisted on a try. Alick spent all of last season on an edge for Burleigh before transitioning into a lock forward role for the Kumuls at the World Cup. With Jarrod Wallace, Herman Ese’ese, and Sam Lisone having departed the club, Alick will hope to push for an NRL debut this season and perhaps play his way into a regular role.

The younger brother of Brisbane superstar Payne, Klese Haas made his NRL debut in Round 24 last year against the Knights. At 6-foot-1 and 104 kg, Haas is a strong back-rower with an impressive level of mobility and made his Queensland Cup debut last season for Tweed. Like Payne, he gets through a mountain of work; he made 158 tackles in his six Queensland Cup games last season at close to 96 percent efficiency. In Tweed’s Round 18 win over Northern Pride, he played the full 80 running for 104 metres and making 23 tackles. After getting a taste of NRL action last season, Haas will be eager to nab a full-time role in Holbrook’s 17.

A highly-touted product of Ipswich State High School, Josiah Pahulu turned heads last year when he ran for 117 metres and made 27 tackles in 46 minutes off the bench in the Maroons’ U19s Origin loss. The teenage prop also represented the Australian Schoolboys in Fiji last year and will look to make the transition into Queensland Cup in 2023. Holbrook himself expects Pahulu to make his NRL debut “sometime soon”; whether or not it happens this year is the question. The first player ever to captain Ipswich State to Queensland and national titles, Pahulu is signed with the Titans until at least the end of 2025 and is on a development deal this season. With Tino Fa’asuamaleaui, David Fifita, and Moeaki Fotuaika to learn from, Pahulu has a chance to make a genuine difference to this Gold Coast side in coming years.

NRL Rookie Watch: Which Warriors are worth keeping an eye on in 2023?

NRL Rookie Watch: Which Storm are worth keeping an eye on in 2023?