Opinion: Is Winx The Greatest Racehorse In Australian History? 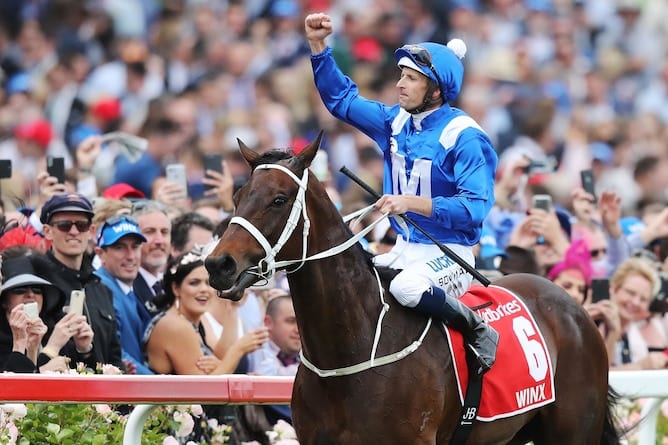 Champion mare Winx made it thirty consecutive victories yesterday which now begs the question, is she the greatest racehorse in Australian history?

After thirty consecutive victories including twenty-two at G1 level Winx is continuing her case to be crowned the greatest ever but has had her doubters with English racing commentator Matt Chapman, who dissed the champion mare’s achievements in the lead up to the Cox Plate in 2018, saying she was “only beating moderate horses”.

This prompted a fierce response from Waller, who dismissed the comments and called Chapman “a bit of a dickhead”.

Chapman had spoken about the number of 120-plus rated horses in England, saying there was far more depth at the elite end than the horses challenging Winx.

Fast forward to Cox Plate day, the stage was set for Winx to create history (not for the first time) with 40,000 fans in the packed out Moonee Valley stands ready to cheer on possibly the greatest horse Australia has seen.

Jockey Hugh Bowman settled Winx in fifth early and at the 600m, she was still fifth, behind the Aidan O’Brien-trained Rostropovich, D’argento and Benbatl.

Rounding the turn at the 350m, she cruised up and took over the lead before opening up in the closing stages to win easily by two lengths.

“I am feeling emotional but the electricity that came through my body when I turned into the home straight just then was something that I guess I only get to feel — but everyone watching, oh I don’t know. I’m lost for words,” Bowman told Channel Seven.

To answer the question on who is the best horse in Australian history we must first compare her to previous champions.

Is one of the first horses that spring to mind and with 13 G1 wins including a Melbourne Cup, AJC Derby, Victoria Derby and two Cox Plates. One of his most impressive feats was as a four-year-old he was able to win the Cox Plate, Melbourne Stakes & Melbourne Cup all within nine days.

Any talk of Australasia ‘s greatest racehorses will always see the wonderful black horse, Kingston Town at the forefront of any discussion. One of the original five inductees into Australian Horse Racing’s Hall Of Fame, Kingston Town won 30 races, including 14 Group 1 events, and was the first million-dollar earner of the Australian turf. His major wins include an AJC Derby, Rosehill Guineas, Queensland Derby, Sydney Cup & three Cox Plates.

This wonder mare has strong claims to being the best and with three Melbourne Cups, a Sydney Cup, Australian Cup, Sydney Cup, BMW Stakes & a Cox Plate along with $14.5m in prize money it’s hard to go past her.

Any debate surrounding all-time great Thoroughbreds, of any gender or era, would need to include a Bay mare that went by the name of Sunline. She recorded 13 wins from her 25 starts in Group One races and her major wins included a Flight Stakes, 2x Doncaster Handicap’s, 2x All Aged Stakes, 2x Coolmore Classic, Hong Kong Mile & 2x Cox Plates.

Back Winx with a $500 deposit match with Ladbrokes

Every horse on our list is worthy of ‘champion’ status and we would prefer to count ourselves lucky to have had so many talented horses throughout history and not compare eras. Each horse managed to capture the nation and bring fans to tv screens and race tracks to support the sport of kings and for now, we will sit back and enjoy a wonderful mare that goes by the name of Winx.

Last week week Toomuchtobear kept the winners rolling in Some of Sydney\'s top 2yos and sprinters will go around of Expressway Stakes Day I\'ve picked out a promising filly from the Waller yard, a Read More
Horse Racing

Been a busy week on the WA racing front (with abandoned meetings from last week and big cards with big fields, along with Monday’s “Saturday” Ascot meeting) The forecast for Saturday is was 39 Read More