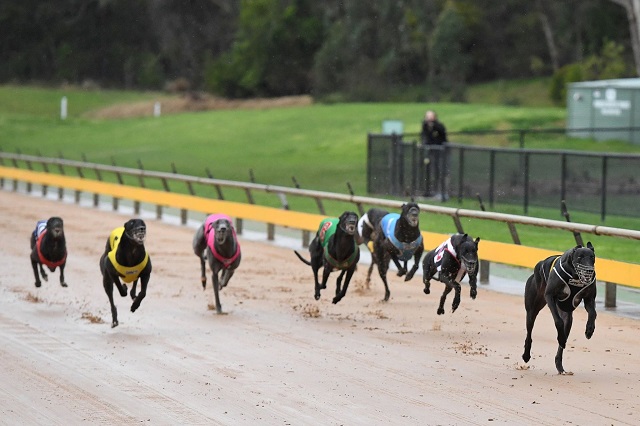 Extremely difficult race to start the day. #5 She’s So Lovable is the intriguing runner who is on track debut. She drops back to 4/5 grade here from FFA level. The Healesville 300m is tough and she’s only a small bitch. Outside box crashes to the rail so she might be in bother. #8 Soda Pee Wee was excellent last week from box 7 when just being getting caught by Louis the Legend. Hard to confidently have money on him as he has had 9 starts here for 0 wins despite running good times. #4 Knuckle Buster next best with a few slow starters drawn inside.

#8 Charlie’s Jar won from this box in a dashing 6.61/19.34s two starts back. In saying this, he isn’t suited out here as he runs best when hugging the inside running rail. #6 Nine Nine is 1/1 down the straight scoring well in 19.46s 3 starts back beating the red-hot Lillico Nikki. #3 Kraken Court bumped into a future champion in Dynamic Prince last Tuesday and ran a good 19.44s on track debut. Hard to split top 3 as they are all boxed poorly, and they could cause each other carnage.

Hard race to assess here. #3 Aston Latham was beaten as a $1.10 fav on resumption. It was a fair effort, but he is his own worst enemy at the start. Will appreciate that run under his belt, 350m and a slow runner drawn inside. The massive negative is that box 4 starts faster and is a mad railer so he is likely to get in some bother. #5 Mega Heist is a bit of a nutcase. #7 Bitter Twist brings WA form. #6 Orson Ruby might just knock them off here as this looks her type of track. Tough, tough race.

Shallow race with not a load of chances. Hard to split the top 2. #8 Hear Me Out is coming off a 4-month spell which is the main concern. Other than that, he is boxed terrifically outwide as he searches for the outside fence in his races.  #2 Crabby Yabby scored here over the 300m in good fashion beating the fast-finishing Charlie’s Jar. Will have to improve at 350m but is capable. #7 Orson Avery has only had 1 start here and it was a good effort from box 3. Will appreciate wide draw and can surprise.

#3 Duncan has been on the receiving end of some poor draws. He is a dog that needs to find the inside rail to run his best and when he has in the past, he has proven himself to run low 19.1/2s. With 2 average beginners drawn inside him, if he can produce his 6.50/55s 1st split he won’t be caught. #4 You Fugitive has good formlines over the 300m. Will need to bring that to the 350m and looks tested to cross Duncan. #7 Invictus Ethan scored from this box last start but needs to find the inside rail to do his best work. Won’t be getting there in this race.

I was really impressed with #6 Anita Sonic Love last start and thought it was probably his best run to date. It was the 1st time he has been “outside of his comfort zone” at Healesville as he didn’t jump, find the bunny or inside rail. He showed some race smarts going around dogs to the outside rail as that was his only chance to win the race. Smart dog. We found #5 Kasemi on top on Healesville debut and he didn’t disappoint scoring an emphatic 19.09s victory @ 15/1. He has an inside box vacant and box 3 looks set to hunt for the inside rail. If he can stalk Anita, he can get him late. #8 Mr Bob, best of the rest.

#4 Smart as Jack is the clear class runner of this race and is clearly top pick. He was slow out in his match race with Hadouken but knuckled down to finish just half a length off him. Before this, he has consistently run 19.1/2s here. Slow starter outside him and should have plenty of time to work into top gear. $2.40 was a ridiculous price. Gone now. #3 Louis the Legend only threat. #2 Indian Calling massive knockout.

Weak 6 dog field this one. I was really impressed with #1 Sacred Path on Healesville debut when he ran 2nd to Gel Blaster in 6.68/19.56s. He was very raw and all over the place but once he found the inside running rail, he powered late to finish just 2 lengths off Gel Blaster which is good form for this race. Drawn perfectly in box 1 today with an average beginner to his outside and then 2 vacant boxes. #7 Perfect Treasure is drawn well out wide and has 1-2 good Healesville times on his CV to be competitive here. #5 Kid Malawi doesn’t win out of turn but can consistently produce good times. 2 inside boxes vacant.

#2 Rumour Is Fact is clearly the class runner of this field. He is a straight track specialist who ran 2nd to the extremely quick Ferdinand Boy LTO in FFA grade over the 300m. From the inside box he can burn and put this race away in the blink of an eye. #6 Tyson’s Town has a very good PB here and has won 10 races down the straight. Only threat. #1 Sharky Shark can follow the hot fav and figure in exotics betting.

Not only is #6 Boes Rose tremendously down in grade here but she draws perfectly and maps superbly. In her last few runs she has bumped into some absolute jets with Jordanville Jet & the high flying Noonbarra Jack just to name a few. She’s already $2.60 into $1.90 and the current quote seems more than fair as she could easily be $1.50 shot in this field. #4 Rockstar Brass is the main danger and if he can reel off his PB he can be competitive. #1 Bella Porscha can jump and run from box 1.

#3 Noonbarra Jack is building his picket fence and looks incredibly hard to beat again. He should have the speed to find the inside rail or at worst sit outside #1 Alfie Mikado. Wide boxes could get involved here if there are a few collisions with the inside boxes. #7 Kraken Skye has only had 1 run here and it was a bad experience. However, he is coming off a win and can run into the placings. #2 Lemonade Kid next best.

Fill In The Form Below To Receive Our Greyhound Racing Tips For FREE!

Back to back days at Healesville and this is a very tricky card We are hoping for some better luck than yesterday, Let\'s turn those placings into winners! Race 1 Tough race to start the day Read More