Who should NSW pick in the centres for Game I? - The Sporting Base
0 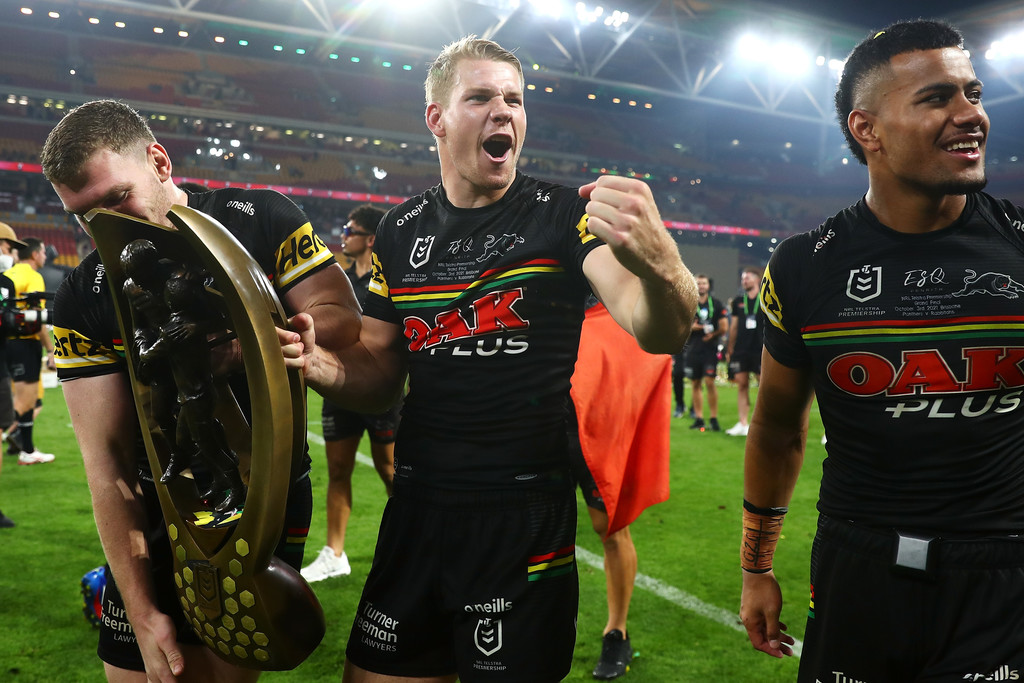 With Tom Trbojevic and Latrell Mitchell both set to miss Game I of the 2022 State of Origin series through injury, the NSW Blues selectors are in search of a redesigned centre-pairing.

With Game I just two weeks away, prospective replacements have just one more week of club football to stake their claim for the vacancies. Fortunately for NSW, centre depth is of little concern; there is a collection of Origin-ready outside backs chomping at the bit for an opportunity on one of rugby league’s biggest stages.

The most experienced player on this list, Wighton has enjoyed somewhat of a return to form after a disappointing 2021 campaign. With both a Dally M and Clive Churchill Medal under his belt, Wighton’s body of work speaks for itself. The 29-year-old has appeared in nine State of Origin clashes for the Blues, with five of them coming at left centre, three as an interchange player, and one at his preferred five-eighth. Wighton is Canberra’s equal-leader in total try involvements and averages over seven-and-a-half runs per game at close to 10 metres per run. If the NSW selectors are hellbent on prioritising experience, Wighton may come into considerations. He is a powerful ball-runner with enough skill and shiftiness to make attacking inroads down a flank and, whilst defensive concerns are valid, he is the only player available who has won an Origin series at centre for NSW.

Graham has cemented himself as one of rugby league’s standout centres and has proven himself as a stalwart in a star-studded, South Sydney backline. The Coogee-junior has enjoyed quite the rise since making the permanent switch from the wing into the centres in early-2020 and is now knocking on the door of an Origin debut. His attacking stats perhaps aren’t as attractive as several of his counterparts but his work out of yardage has been superb in clubland; in 2021, he is third among all centres in metres per game and one of only three qualifying centres this season to average at least 13 runs per game and nine metres per run. He has also developed into a strong one-on-one defender with the ability to make correct reads within a defensive structure. Graham began the season at right centre for South Sydney but has transitioned over the left in recent weeks – an ability which should serve him well as a potential candidate for NSW.

Since making his first-grade debut at the backend of 2019, few outside backs have matched Crichton’s durability and consistency. The 21-year-old has appeared in 60 of a potential 62 games since the start of 2020 and has proven a pillar for flying Panthers. Crichton is equal-third this season among all centres in total try involvements and leads the position in try-scoring. His production does not just come at one end of the field, however; he is one of just three qualifying centres this season to average at least 13 runs per game and nine metres per run, whilst he has run for more than 110 metres in 10 of 11 games this season. An ability to play every position in the backline and kick goals is the cherry on top of an extremely well-rounded player. He has also spent time in the NSW camp previously and has a deadly combination with several of the Penrith contingent who will appear in Game I for the Blues.

Few centres in the NRL have proven as difficult to handle one-on-one as Staggs. The Brisbane stud has shown a tonne of raw power, speed, and skill since making the leap into first-grade and may just find himself donning the sky blue in a fortnight’s time. The 23-year-old leads all qualifying centres in metres per run and runs per tackle breaks, all whilst ranking sixth-best in try causes per game. His blend of gravity and skill makes life easier for those around him; Selwyn Cobbo has made a meteoric ascension into the Queensland Origin frame playing outside of Staggs. Pairing him down the right flank with veteran speedster Josh Addo-Carr would present a plethora of attacking inroads for NSW, whilst few centres in the premiership are better-suited defensively to match up against Queensland’s Valentine Holmes.

Lomax has proven to be a well-rounded, dependable right centre at NRL level with the ability to create opportunities for himself and those around him with ball in hand and nullify opposing centres defensively. Attacking-wise, the Temora product is yet to hit his straps in 2022 with just four total try involvements on the season. He has, however, been productive out of yardage; he is one of the premiership’s six qualifying centres who average over 13 carries per game and over eight metres per run. Defensively, he is third among all centres in tackles per miss and eighth-best in try causes per game. The 22-year-old has a relationship with head coach Brad Fittler, who coined him “the gifted one” as a teenager, and has spent time in the NSW camp. His numbers are not as eye-popping as several of his counterparts but there is reason to believe that Fittler has been keeping tabs on the Dragons’ young star.

Few could have predicted Talakai’s staggering start to 2022 but the Cronulla wrecking ball has managed to play his way into the Origin conversation and rightly so. The 25-year-old has found a home at left centre under first-year head coach Craig Fitzgibbon and has proven a revelation. He currently leads all centres in total try involvements, tackle breaks, and run metres per game. Defensively, he grades as one of the premiership’s strongest centres, however, no centre’s tackle profile consists of a lower percentage of one-on-one makes, which means Cronulla’s personnel and defensive systems deserve some credit for Talakai’s ability to excel on the defensive end. After a barnstorming month of April, Talakai has cooled off a little bit over the past few weeks and was unable to finish Cronulla’s most outing on the Gold Coast due to an ankle complaint but is not expected to miss any time. Whilst he may not have the same body of work as some options at centre, his form in 2022 has been undeniable and, if NSW are looking to replicate Mitchell’s power and gravity at left centre, Talakai may be the player.

Burton enjoyed a stellar 2021 as Penrith’s left centre, scoring a try in a Grand Final victory and being named at centre in the NRL’s Team of the Year. 2022 has, however, looked quite different for the Dubbo-native since making the move to Belmore, with his Bulldogs sitting last on the competition ladder and having a difficult time turning field position into points. Now in the six jumper, Burton has been close to Canterbury’s best but his argument for a NSW jumper is predicated on his 2021 play. Burton led all centres last season in total try involvements and averaged 9.6 runs per contest for 9.9 metres per run. He was electric for much of the season and formed quite the combination with halves Jarome Luai and Nathan Cleary, lock Isaah Yeo, and winger Brian To’o.

Whilst Tago’s name has seldom been thrown around in conversations surrounding NSW’s vacancies at centre, the 20-year-old has enjoyed a sensational 2022 after taking over as Penrith’s left centre following the departure of Matt Burton. The St. Marys-junior is equal-second among all centres in total try involvements, whilst he and Staggs are the only two centres in the NRL averaging over 10 metres per carry. Furthermore, he leads all centres in percentage of carries exceeding eight metres and is among the premiership’s better defensive centres per several measurements. He is, however, the youngest and least-experienced on this list with just 17 NRL appearances to his name.

For Fittler and his panel of selectors, several factors will come into play as they attempt to land on which players are deserving replacements for Trbojevic and Mitchell – arguably NSW’s two most productive players in the side’s dominant series victory last year. The importance of experience, club combinations, club positioning and weighing potency versus consistency will all be important facets of game-planning for the NSW staff to consider.

Crichton, Burton, and Tago all have experience playing club football alongside Luai, Cleary, Yeo and To’o, whilst Staggs and Talakai have cemented themselves as the most potent ball-running centres of 2022, and Wighton, Graham, and Lomax have spent time in camp previously and have relationships with the coaching staff.

At this stage, Staggs and Crichton appear to be the frontrunners for the vacant spots in the NSW backline.

Concerns over Staggs’ relatively low involvement rate should be overlooked; with the likes of James Tedesco, Brian To’o and Josh Addo-Carr on deck, NSW should have no workload issues coming out of yardage. Last series, Mitchell averaged just 17 touches of the ball per game but timed his involvements brilliantly and personified the adage of “quality over quantity”, which is a blueprint Staggs can and should follow. He is arguably the toughest one-on-one matchup of any centre in rugby league and the clipboards in the Queensland sheds will undoubtedly have his name circled should he be selected.

Crichton, meanwhile, is as consistent as modern-day centres come and his Penrith synergy should serve him well if the selectors land on him. A brilliant attacker who is productive on both sides and ends of the field, Crichton has been knocking on the door for some time now and would be a deserving centre replacement for NSW.

All statistics noted are courtesy of Fox Sports and the NRL.