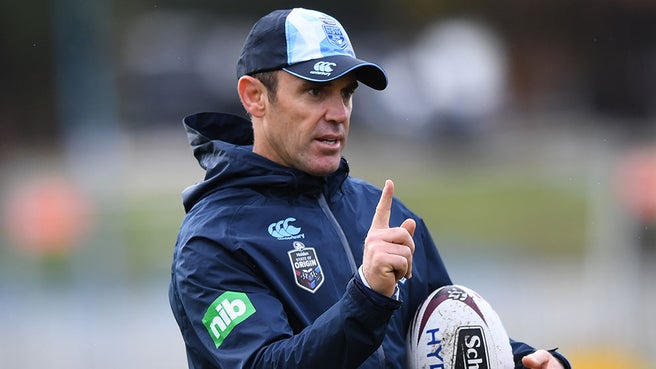 Brad Fittler said he “won’t cop” claims of racism from Latrell Mitchell after the disgruntled star accused NSW of going “real funny” on a trio of indigenous players over their Origin anthem stance.

NRL.com published an interview with Mitchell in which he made the explosive allegations against Blues officials only for the comments to be taken out following the threat of legal action from the NSWRL.

“NSW went real funny on us because we don’t sing the anthem,” Mitchell said referring to himself, Cody Walker and Josh Addo-Carr.

What remained in the article, however, was criticism from Mitchell of Fittler’s handling of his axing following a disappointing performance in Game One.

“I didn’t get told what I needed to work on. I know I played a bad game but it’s like I can’t play good every game,” Mitchell told NRL.com.

“I haven’t had a yarn with him (Fittler), he said he was going to ring me and he still hasn’t rang me … it’s like well, I haven’t got nothing off him.

Speaking to the Sydney Morning Herald, Fittler brushed off the selection criticism but drew the line at claims of mistreatment of the indigenous players.

“There were some things in the interview that appeared and were then taken out. I can handle the other stuff, but the claims about the anthem are completely false. I wasn’t going to cop that.

“I hope Latrell has a good break.”

Mitchell also spoke about his disappointment when learning the Roosters had pulled out of negotiations while he was visiting his family in Taree.

“I said to Trent, ‘Look, I want to go and explore my options, is that alright?’ and he’s like ‘Mate, you’re entitled to it’,” Mitchell told NRL.com

“That’s where it ended, pretty much, and that’s all I took out of it. “I said, ‘Righto, well, then I’m going to go see. Then I went to pub that day, having a beer here and there, and then see the Roosters pull out of Latrell Mitchell’s deal.

“And I was like, ‘That’s a kick in the teeth’.” As it stands, Mitchell has one year left on his deal at the Bondi-based club, but is widely tipped to be with a new team by the start of next season.

Fill In The Form Below To Receive Our NRL News, Previews & Tips.