5 Things to Watch: Everything to keep an eye on in NRL Round 12 - The Sporting Base
0 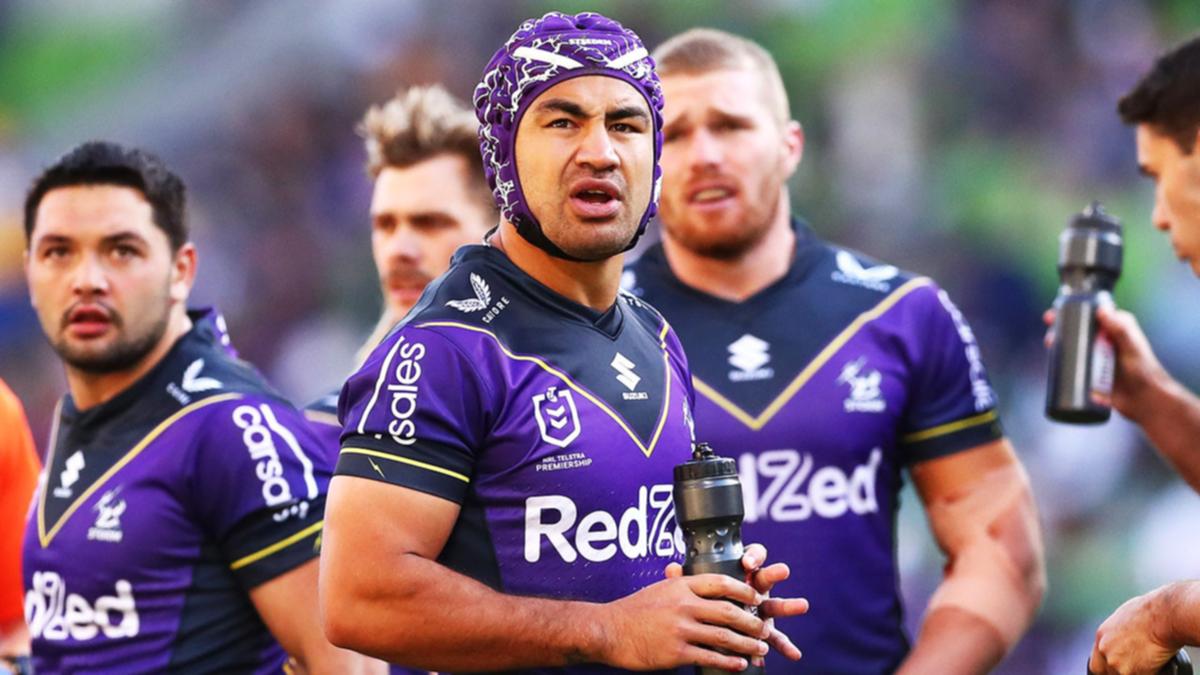 Several grudge matches, some high-profile returns, and another top-four clash will be a part of the action this season’s Indigenous Round, which also marks the final round that Dally M votes will be made public and the final round unaffected by State of Origin. Here are 5 Things to Watch in Round 12.

Hughes set to return for Melbourne

Much has been made of the Storm’s (Wurundjeri) difficult fortnight in which they have been outscored by a combined 68-12. This Thursday, they will face the Sea Eagles (Gayamaygal & Garigal) at AAMI Park in the first of several grudge matches across the weekend. The Storm will welcome back star halfback Jahrome Hughes and will do so with open arms, after missing the past two weeks with a calf issue. Hughes is the only player in the NRL this season who is in the top 15 for both tries and try assists and will add some major potency to Melbourne’s uncharacteristically messy attack. The Sea Eagles, meanwhile, were rocked by news that star fullback Tom Trbojevic would miss the remainder of the season after dislocating his shoulder in their last-start loss to Parramatta. Reuben Garrick will shift to the back, whilst veteran Jorge Taufua has been named to play his first NRL game in over 20 months. Manly have lost four of their past five and now sit on the outside of the top-eight looking in. Manly versus Melbourne clashes never fail to disappoint, however, regardless of how the sides are traveling and Thursday night should be no different.

The premiership’s two most in-form sides, the Panthers (Dharug) and the Cowboys (Wulgurukaba & Bindal) will do battle this Friday evening at the foot of the mountain in their final week before being impacted by Origin. The Panthers sit atop the competition ladder, having won 10 of 11 games to start the season and are fresh off a 20-point win over the Roosters at the SCG. The Cowboys, meanwhile, are sitting third on the ladder and are riding their first six-game win streak since mid-2015, with the men from Townsville still celebrating their 30-point demolition of the Storm last week. The Cowboys will, however, be without Kyle Feldt and Jason Taumalolo, who sustained injuries in their last outing. The Panthers and Cowboys run for more ground than any of the premiership’s other teams, so expect plenty of running and a proper arm-wrestle up the middle-third of the field. They are also this season’s leading defensive sides, with the two sides conceding over 20 points just once combined over their past six matches. Taking down the Storm is one thing but making the trip to Penrith without Taumalolo and Feldt and overcoming the near-perfect Panthers is another. The Cowboys have proven that underestimating them isn’t the wisest of moves, but this will be, without question, their toughest ask of the season.

The Battle of Southeast Queensland

The Broncos (Yuggera & Turrbal) will be in search of their first six-game win streak since May 2017 when they face the Titans (Yugambeh) at Suncorp Stadium on Friday night. The southeast Queensland derby has produced a number of memorable finishes over the years, with perhaps none more so than Brisbane’s 8-point victory in Round 8 of 2021 when the Titans rocketed out to a 22-nil lead after just 15 minutes only to lose 36-28. The Broncos will still be without Adam Reynolds who is out with a groin issue, whilst the Titans are still yet to welcome back David Fifita as he recovers from a knee complaint. Few players have received as much attention as teenage standout Selwyn Cobbo in recent weeks, with the Cherbourg-native having crossed for nine tries in his past five games as he makes a late push towards a debut Origin jumper. The Titans’ patchy edge defence may be in for a long night if they allow the likes of Cobbo, Kotoni Staggs, and Herbie Farnworth to create early inroads. The Titans, meanwhile, have been buoyed by the return of fullback Jayden Campbell, who has run for 431 metres and broken 17 tackles since his return to first-grade a fortnight ago.

The Bulldogs (Dharug & Bidjigal) will play their first game on the hallowed turf of Belmore Sports Ground since May 2019 when they face the Dragons (Dharawal & Yuin) on Sunday afternoon. The Dogs have won just one of their past seven at Belmore but have enjoyed a strong record over the Dragons in recent times, having won 14 of their past 20 against the red and white. Josh Addo-Carr will return to the lineup after a bout of the flu and will appear in his first game as a Bulldog at Belmore, whilst the Dragons welcome back Andrew McCullough onto the interchange bench. The Dogs are fresh off a last-start defeat at the hands of the Wests Tigers at Leichhardt 36 points to 22, which was their highest points total of the season, whilst the Dragons scraped home against the Warriors at Kogarah 24-18 to move within one win of the top-eight. Matt Dufty and Paul Vaughan will face their former-club for the first time after their much talked about 2021 exits. If St. George Illawarra are serious about their top-eight aspirations, they have to take care of the Dogs in this one. Canterbury are the only side in the premiership who have not won more than two games this season and have won just one of their past 10. The Dogs have, however, reached at least 22 points in three of their past four encounters with St. George Illawarra, so a relatively high-scoring affair could be on the cards.

Who gets the nod on the wing for Queensland?

With Game I of the 2022 State of Origin series just a fortnight away, Origin hopefuls are entering their final week to impress their respective coaching staffs. First-year Maroons head coach Billy Slater still has to knuckle down several positions, in particular his wing-pairing. It seems reasonable to assume Melbourne’s try-scoring ace Xavier Coates will occupy one wing, with the second spot up for grabs. Coates made his Origin debut as a 19-year-old in 2020 and has gone on to score a pair of tries in five appearances for Queensland. His wing-partner, however, will likely come to down one of Brisbane teammates Selwyn Cobbo and Corey Oates or North Queensland’s Murray Taulagi. All four have been in superb touch to start 2022 and each offer their own unique skillsets. Cobbo is second among all wingers in metres per run, whilst he is equal-fifth in total try involvements. Oates, meanwhile, leads all wingers in runs per game and is the only winger in the premiership averaging more than 14 runs per game and more than 10 metres per run, as well as being fourth in total try involvements. Taulagi is equal-third among wingers in total try involvements and leads the premiership in percentage of runs exceeding eight metres, whilst only three others match his average run totals and metres per run. Slater has a trio of wingers enjoying terrific club form at his doorstep, which is not a luxury Queensland have enjoyed in recent years.