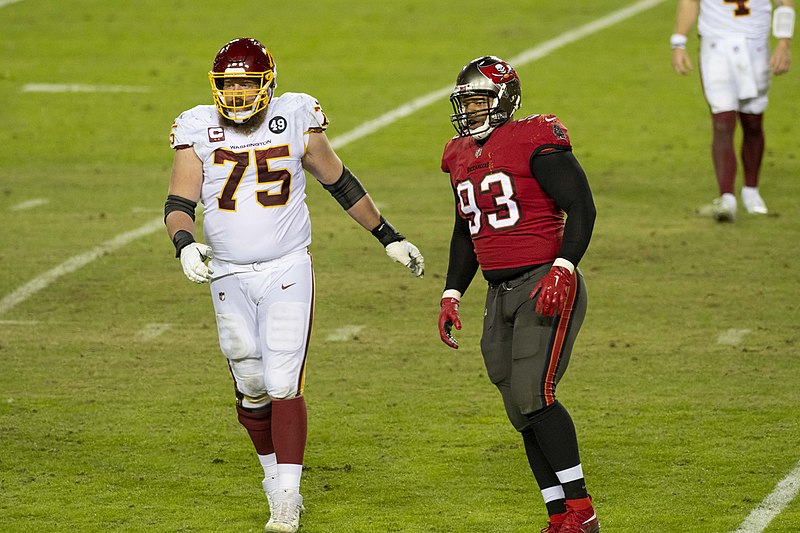 The Philadelphia Eagles signed Linval Joseph of Christiansted, United States Virgin Islands on Wednesday, and Ndamukong Suh of Portland, Oregon on Thursday according to Tim McManus of ESPN. The financial terms of the contracts have not yet been disclosed.

In Suh’s NFL career, where he played 191 games, he has had 590 combined tackles (388 solo tackles and 202 assisted tackles), 130 tackles for a loss, 212 quarterback hits, one safety, one interception for 20 yards, 38 pass deflections, five forced fumbles, nine fumble recoveries for 60 yards, three touchdowns from fumble recoveries, and 70.5 sacks. Suh’s lone career interception came in his rookie season, a 44-6 Lions win over the St. Louis Rams on October 10, 2010. Suh’s lone career safety came in a 40-10 Lions win over the Green Bay Packers on November 28, 2013.

Suh (pictured right) was on the Buccaneers team that won the 2021 Super Bowl from the 2020 NFL season. The Buccaneers defeated the Kansas City Chiefs 31-9. In the playoffs, Suh has played 12 postseason games, and had 38 combined tackles (21 solo tackles and 17 assisted tackles), six tackles for a loss, seven sacks and one forced fumble.

Initially selected second overall in the 2010 NFL Draft, Suh was only chosen behind Rams quarterback Sam Bradford of Oklahoma City, Oklahoma. Suh played his college football at Nebraska. In his rookie year of 2010, he was the Associated Press Defensive Rookie of the Year, and was selected to this first of five Pro Bowls. Suh was also chosen to the Pro Bowl in 2012, 2013, 2014 and 2016.

Down the stretch, what Eagles newly acquired defensive tackle will have the bigger impact, Suh or Joseph?