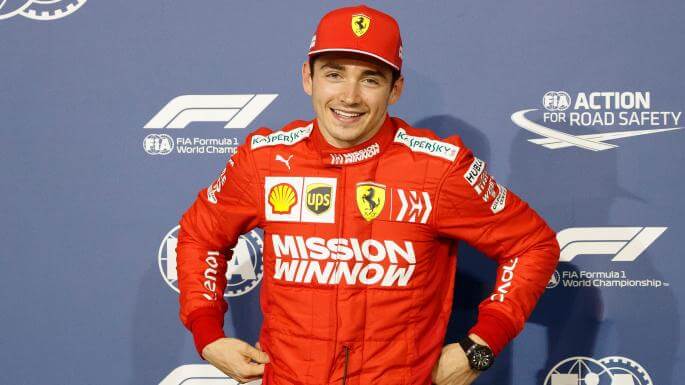 It could be said that Charles Leclerc is already a star but we wanted to take the opportunity to put the spotlight on the 21-year-old and help you get to know our Future Star Of The Week.

Charles collected exploits from an early age in karting. French Champion in 2009, then the winner of the Monaco Kart Cup in 2010, the CIK-FIA Academy Trophy and the Junior World Cup in 2011, he continued to shine among the world elite of the discipline until 2013.

His rapid rise continued in single-seater from 2014 onwards. Top rookie in Formula Renault in his first season, then in Formula 3 the following year, he raised the pace further in 2016 by winning the GP3 Series.

The week following his victory in the GP3 title race, Charles Leclerc was confirmed to be graduating to the FIA Formula 2 Championship for the 2017 season with Prema Racing, alongside fellow GP3 racer and Ferrari junior Antonio Fuoco.

Stepping up to F1 in 2018, Leclerc showed flashes of ballistic pace on Saturdays and racing brilliance on Sundays, dragging the Sauber beyond its limits – and earning himself a money-can’t-buy race seat at Ferrari for 2019, stepping into the shoes of the Scuderia’s last world champion, Kimi Raikkonen.

While initially only announced for 2019, a few days later, then-Ferrari team principal Maurizio Arrivabene indicated that Leclerc’s contract was going to be four seasons long, running “at least until 2022”.

Leclerc made his first test day as an official Ferrari race driver on 28 November 2018 in Abu Dhabi. In his first Grand Prix driving for Ferrari, he started and finish in fifth position at the Australian Grand Prix.

Out of the car, Leclerc is modest and thoughtful – but then he is on his own very personal mission. This exciting young talent is racing for his late father Herve and his friend and mentor Jules Bianchi, the F1 driver who died in 2015.

On the evidence so far, he is doing them both proud.

Good luck Charles and we hope to see you winning the Drivers Championship very soon!

With the NFL back in full swing, we thought it was only fitting that we have linebacker Devin Bush Jr as our Future Star Of The Week Devin Bush Jr July 18, 1998 (age 21) Birthplace: Read More