Lomachenko looking to reclaim titles - The Sporting Base
0 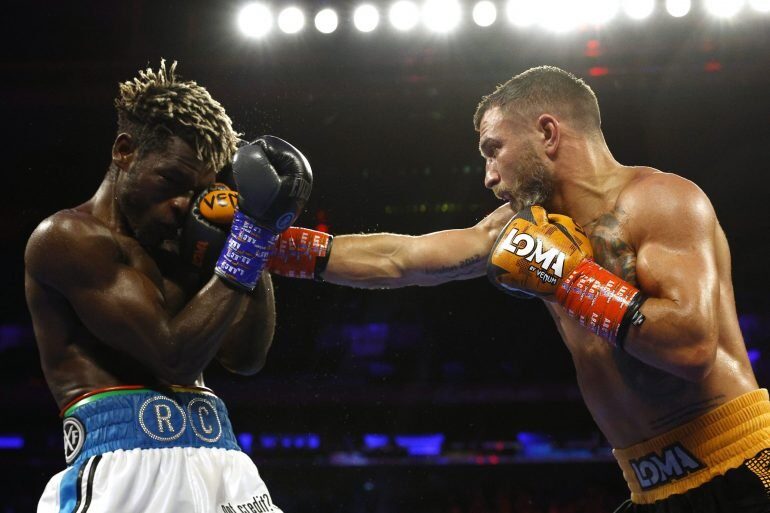 It was the perfect opportunity for the Ukrainian to prove just why he deserves a shot at reclaiming his titles which he lost to Teofimo Lopez in October last year. Somewhat of a vindication of his poor performance against the American in a unanimous decision loss.

By being beaten by Lopez, Lomachenko left the WBA (super), WBC (franchise), WBO, and the Ring lightweight titles behind. It then laid a pathway for Kambosos Jr to battle with Lopez for a unification bout after being made mandatory for the IBF belt already held by the American.

Now that Kambosos is the new lightweight king, everyone wants a shot at his titles. Komachenko has joined the party and like WBC champion, Devin Haney, he is willing to travel down under.

The two-time Olympic champion for Ukraine, was dominant in his weekend display, winning basically every round on his way to a unanimous decision victory over Commey.

Despite not finding a knockout, there were plenty of chances for the Ukrainian to finish his opponent and in the seventh round, he called for Commey’s corner to throw in the towel.

Following the announcement, 33-year-old Lomachenko who won 396 of his 397 amateur fights stamped his claim as one of the main contenders for Kambosos’ belts.

“I will go anywhere I need to go to fight him [Kambosos],” he said. “I need this chance. And if God gives me this chance, I’ll take it.”

If not for Kambosos, WBA (regular) holder Gervonta Davis and WBC champion, Haney, are other options available.

The next month or so will prove to be a major step in the lightweight division as each of the top boxers has fought within a few weeks of each other, meaning scheduling is on track.